Our “Big Ideas” posts aim to pick a few ideas that strike us as novel in the countries that we visit.  We may not necessarily agree with the ideas or find them universally applicable, but they are statistics or concepts that get us thinking or give us a little nudge to resituate.

Switzerland is a small country that knows how to get the best out of its strengths. The Swiss have a reputation for being boring, but they have managed to attract tourists and businesses alike to their country, if only for the many ways they turn milk into cheese. 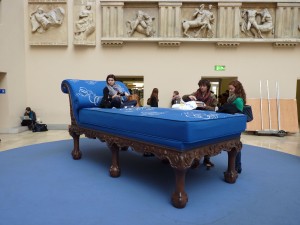 A big chair for big thinking at a uni in Zurich

1. Only 30% of Swiss pursue academic university studies. Higher education is often touted as an indicator of a country’s development, and yet in one of the richest countries in the world, where unemployment hovers between 1 and 4%, only 30% of the population pursues “general education” university degrees. Similar to the German system, most teenagers choose vocational education through an apprenticeship system, spending half the day at work and half the day at school starting around 15 years old. In the US, vocational training programs tend to be associated with students who don’t do well in “book learning”, but that’s not the way it works in Switzerland.  Companies value aptitude for learning and willingness to work more than a college diploma for certain positions. We met a 23-year-old who had moved to Zurich on his own five years earlier to work as a rail traffic controller, a job for which he had trained for a year as an apprentice after a year rotating through other possible positions at Swiss Railways.  Compare that 30% to the 70% of high school graduates enrolled in college in the United States, many of whom will accumulate debt instead of professional experience in exchange of qualifications that may or may not get them a job.

The downside: Switzerland imports doctors, nurses and engineers because they don’t have enough of their own.

2. Made in Switzerland. We were surprised throughout our time in Switzerland by how very Swiss everything was. Even the gondola we rode down from Mt Pilatus was made in Switzerland. Switzerland has a vibrant domestic market that is supplied to a large degree by Swiss businesses without too many protectionist measures, and have somehow managed to avoid the race to the bottom and homogeny of giant chain stores. 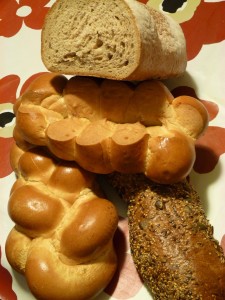 3. Bread. Put the Germans, French and Italians all together on a small piece of land and incredible bread is sure to come. Light, fluffy Tessinois, dense tresse au beurre similar to challah, multi-grain dark loaves… We were not interested in the watches – we drove home with a trunk full of Swiss bread. 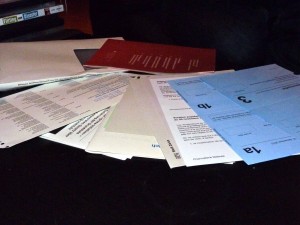 4. Participatory democracy. This was the thing we were most fascinated to learn more about on our trip to Switzerland.  We knew about Swiss’ penchant for referenda but were not sure how it really worked. The Swiss are called to vote 30 to 40 times a year. Any time a federal law is changed or proposed, it must be submitted to a referendum. At the local level, if a city wants to spend more than a certain amount of money on a particular project, a referendum must be called. While we were in Zurich, a referendum was called to approve a project with a budget of 88 million Swiss francs to expand a museum. With scandals of back-channel deals, corruption and nepotism in public affairs erupting monthly in Spain (our country of residence), increased use of referenda sounds like a refreshing way to increase transparency, unite around common causes and participate more actively in political life. Anyone who wants to challenge a federal law can announce the intention and then collect 50,000 signatures within three months’ time to call a referendum. Referenda at the local level require fewer signatures.

Alas referenda are not a panacea and not necessarily applicable outside a small democracy. The Swiss complain of repeated calls to vote on the same issue until the outcome is the one desired by the politicians, or trickily worded questions leading people to vote the opposite of what they meant. Switzerland has a population of about 8 million and the mechanisms and cost of organizing referenda are manageable.* It would also seem to be fundamental that politicians are only part-time. They all have jobs and spend just 3 weeks per quarter in Bern dealing with legislative issues, so they don’t necessarily have time to wage campaigns for each referenda. Imagine referenda at a federal level in the United States. The media frenzy would be unbearable and the energy devoted to winning the numbers game on each issue would probably paralyze government completely.

*Except in places like Glarus, where they continue to vote by raising hands. 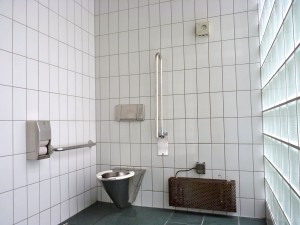 5. Respect for civil society and public goods. We asked a few Swiss people whether the country was so orderly due to education — a set of common values reinforced both at home and at school about how one should behave in society — or due to laws and their corresponding punishment. We did not get a very good answer. We can say that the public restrooms are immaculate and amply available; on a few dozen visits to public restrooms around the country, we saw not a spot of graffiti and not a single toilet out of paper. We can also say that the country is blanketed in speed radars and that a Swiss friend warned us that half of Luzern’s law enforcement would likely descend upon us if we double-parked anywhere in the city. Nature, nurture or Pavlovian training, we’re not sure but the Swiss seem to truly respect their common spaces and services and want to leave them the way they would like to find them.

Don’t misread us – Switzerland is not a paradise of law-abiding citizens, clean toilets and happy cows.  Its banking issues have been legion, mandatory military service is being challenged as arcane, and legalized prostitution is under fire for facilitating human trafficking, among other of the country’s stickier political issues.  Two weeks is an exceedingly short time to get to know a place and we surely suffer from “grass is always greener” syndrome. But a few big ideas are a breath of fresh air that allow us to see the issues we think about every day in a new way. In Switzerland, we were liberated if only for a moment from the dismal and pervasive discourse in Spain about foreclosures and unemployment and euro bailouts. That is what we call a vacation.