All Gods Are One: A Visit to Badrinath Temple

We hadn’t planned to attend the opening of Badrinath Temple, but when our trekking excursion from Joshimath was delayed, we decided to go on a whim. We couldn’t have anticipated that the 24-hour excursion would be a perfect array of the elements that make up what it is to travel in India.

We were delighted to get the two front seats in the share jeep out of Joshimath. We threw one backpack up on the roof and kept the other at our feet, but still had leg room to spare. In the row behind us were crowded four passengers: three sadhus and an elegant man from Delhi on his first pilgrimage to Badrinath. And behind them were another five passengers. 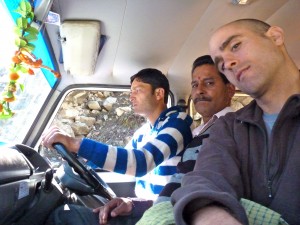 Of course it couldn’t last. Ten minutes out of town, the jeep stopped and a man squeezed in between us and the driver. This created the curious arrangement in which the driver had to reach between the new passenger’s legs to shift gears and nearly ram him in the crotch when he shifted into 2nd and 4th gear particularly.

The road to Badrinath is prone to land slides and falling rocks. While most of the road is paved, there are harrowing stretches of bumpy, rocky road. There is two-way traffic which leads to some close encounters with the precipice. It is, however, one of the most beautiful drives we have been on, anywhere in the world, with snow-capped mountains, pine-covered rock faces and the mighty Ganges raging below. We saw pilgrims making their way on foot to Badrinath, dressed in orange and carrying little more than a blanket and a can in most cases.

Halfway to Badrinath, the man from Delhi said to us, “The sadhus would like to know why you have come to India and to this holy place.” We said that we knew India was changing very fast and so we wanted to see it now; that we wanted to learn about India’s religious traditions; that we hoped to take with us all of the good things about India. The man from Delhi translated, then the sadhu spoke, and then the man from Delhi translated again for us. “The sadhu has said that perhaps you were Indian in a previous life and for some reason you feel called to Badrinath to receive the special blessings from this place.” 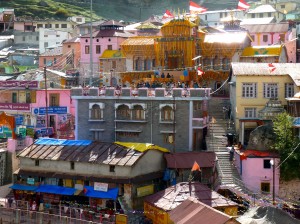 Badrinath temple nestled in the village

We arrived to Badrinath around 10:30 in the morning. The dhabas (food stands) and shops seemed to be just opening up and there was hardly anyone around. We walked around in search of lodging and found nearly everything to be fully booked – guest houses, dharamsalas – or out of our budget. We walked a little way out of town and got pointed to a guest house a couple of rows back from the road, with a room available for 1,000 rupees. This was still more expensive than anywhere we had stayed during our first month in India but fearful that we wouldn’t find anything at all, we took it.

The guest house was in the midst of sprucing up for the season. It was less than 24 hours before the temple opening, the first guests were arriving, but we had to ask for light bulbs because they hadn’t gotten around to putting any in the rooms yet. The staff was busy applying fresh paint to the bannisters. To be more precise, two or three men were painting while six or seven boss-type men sat around in the sun drinking chai and barking orders.

The room wasn’t the only thing that was more expensive. Everyone is out to make a buck in Badrinath for the 6 months of the temple season. Chai, usually 5 to 7 rupees a cup, was universally worth 10 rupees in Badrinath. We stopped to look at some hand-knit goods that are supposedly traditional in the area, and when we walked away the man from Delhi said that the woman was wearing too many gold hoops in her ears. She had dressed up traditionally to try to sell her wares but she was not likely from the village nor making anything by hand.

We walked to Mana Village, a pleasant 3-km stroll out of Badrinath and the last town in India before the Chinese border. We visited Bhim Pul, a giant rock that is believed to have been placed in its spot by the Pandava brother Bhima (of legendary strength) so that his wife the princess Draupadi could cross from one side of the river to the other. Ridges on either side of the boulder indicate where the fingers left indentations. Just below, a quiet pool of turquoise water is said to be the beginning of Saraswati, which is believed to disappear underground for some 800 kilometers and emerge near Allahabad at the confluence of the Ganga and Yamuna rivers. 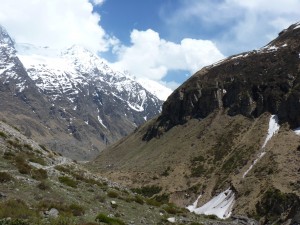 Another 4 kilometers beyond Bhim Pul are the Vasudhara Falls. The water is believed to have medicinal properties and some trekkers carry jars of it home. We ran into some young Indians on the trail who said the falls were holy, but they weren’t able to explain the story to us.

Breathing the fresh mountain air, walking alongside the crystalline river, watching clouds gather around the mountain peaks and cover them with fresh snow, it was easy to understand why Badrinath is a holy spot. From November to May, Badrinath is blanketed in snow and completely inaccessible, its residents decamping to Joshimath or elsewhere for the winter. It is as if it would be worn down by human use if open all year; only the gods are worthy of such a place.

The temple’s doors would open at 4 AM on May 16th. We got out of bed at 3:30 AM and walked to the temple under a pitch black sky full of stars. As we got closer, we began to hear chanting. We walked past the natural hot springs where the devout were cleansing themselves before entering the temple. 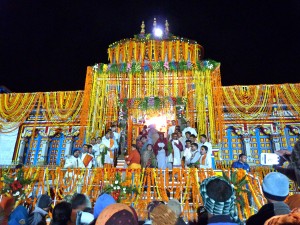 The stairs to the temple door were lined with devotees, VIPs and the Rawal (priest) singing Vedic chants. An eager crowd of spectators watched from below, shooting pictures. At almost precisely 4 AM the doors were opened and the first worshippers entered. Several of them went running up the stairs as though they couldn’t stand the wait any longer.

Worshippers bore the usual offerings of flowers, nuts and dried fruit. Money may be placed in the donation boxes. The man we met from Delhi had received money from a wide circle of acquaintances who asked him to deposit their offering at the temple on their behalf.

Badrinath is one of the holiest Char Dham sites. The temple is dedicated to Vishnu. It is believed that Lord Vishnu was doing his penance out in the open at Badrinath when the goddess Mahalaxmi turned herself into a badari tree to shelter him. Badrinath is also one of the auspicious places to perform shradha, making specific offerings to the ancestors. Shradha is typically performed annually, but once carried out at one of the holy places like Badrinath, the descendants of the person who has performed the shradha need not do it annually. There has been a temple in Badrinath as a pilgrimage site since the 9th century, though the structure itself has undergone renovations and reconstructions over the centuries.

After the ceremony was complete, we returned to the guest house for a nap. When we woke up and went for breakfast around 7:30, Badrinath had been completely transformed. The road into town was choked with traffic, leaving a wake of dust and diesel fumes behind. Rivers of people lined the sides of the road as they made their way to the temple. Free food and chai was being doled out at stand after stand. Some pots were meant to hold food for 1,000 people.

The owner of the guest house had seen us come back from the opening ceremony and when we checked out he asked us if we were Hindu. We explained that we were not and he replied, “It doesn’t matter. All gods are one. They have a mouth to speak to us, eyes to see us and ears to hear us.”

This is India: people crammed together in a jeep, breathtaking landscapes, slapdash last-minute preparation, opportunistic capitalism, generosity and spirituality all mashed up.