If you only have time to do one thing in Singapore, eat. And even if you have time to do something else, you should eat some more. Singapore’s place on the map and its history mean that you will find Indian, Malay, Chinese, Indonesian, Japanese, even the odd Australian steakhouse, and that’s not even counting all the varieties within these umbrella categories.

We spent only three weeks in Singapore so we cannot begin to pronounce anything we ate as “the best” but we can tell you some places where we enjoyed what we ate. (The directory is at the end of the post.)

Hawker centers are the stuff Singapore’s reputation are made of. A cluster of food stalls each specializing in different dishes, hawker centers are where you may find yourself saying, “I’ll have one of everything.”

Self service hawker stand: I ain’t bringin’ it to your table

Lau Pa Sat is billed as the oldest hawker center in Singapore. The building dates from 1894 and even before the current building, the site has been a market since 1825. There are food stalls inside and various kinds of barbecue outside in the street. We chose inside, stood in the longest line we saw and ordered char kway teow and Hokkien mee at Lai Heng. Char kway teow is a dish of noodles and rice cakes fried in lard, soy sauce and shrimp paste, with bits of pork, whole shrimp and bean sprouts laced throughout. The color is not pretty but I promise it’s tasty.  Hokkien mee are thick egg and rice noodles fried up in shrimp sauce (there may also be chicken and pork in the sauce but it usually just tasted shrimpy), served with whole shrimp and sliced pork.  Both were exceptional at Lai Heng, though they are better known for the char kway teow.  We only got to Lau Pa Sat once during our stay but there were enough stalls for several months of eating. I actually daydreamed for a second about working in one of the high-rise office buildings around Lau Pa Sat to be able to have lunch there every day.

If you own the Lonely Planet for Singapore, you may have read about Wasabi Tei, a hole-in-the-wall sushi place with a line outside for the creations of the “sushi nazi,” Peter.  If you poke around the Internet before you go, you will find out that Peter has sold Wasabi Tei, which has gone precipitously downhill, and opened a new place called Chikuwa Tei (9 Mohamed Sultan Rd). 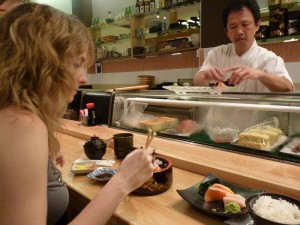 A surreptitious shot of Peter at Chikuwa Tei

On our first visit we ordered the chirashi set and sashimi set. Priced at SGD$25 (€14), both came with thick, generous slices of fish and filled us up. Peter uses the same fish in the chirashi and sashimi (logically…our mistake when ordering) so you should order differently if you want to pick at your dinner mate’s plate.

On our second visit, we went straight for the sushi platter for 2 people (SGD$55 / €30.50), which included toro (tuna belly). Sitting at the bar and watching Peter work made me hungry, so I also ordered scallop sashimi and futo maki. That’s when I realized we’d gone out without our credit cards and might not have enough cash to pay for dinner. As we scavenged through all our pockets, Peter kept waving at us from behind the bar saying, “It’s OK, it’s OK” (seriously, who called this guy a nazi?). We poured every last piece of change on to the counter – we had enough with 30 cents to spare! With no money for a taxi, we had to walk back to the hotel but I would spend my last nickel on good sushi any time. 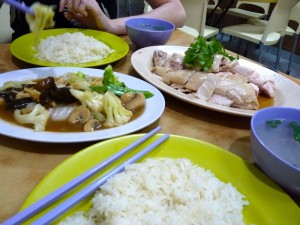 You get chicken and you get rice: chicken rice

As American as apple pie…as Singaporean as chicken rice. Chicken rice looks like something you might be served in a hospital: poached white chicken, white rice, chicken broth. To boot, the chicken is served room temperature, not hot.  But looks can be deceiving and chicken rice is a thing of beauty, efficiently using most if not all of the chicken in an elegant yet simple dish.

The chicken is stuffed with ginger, garlic and green onions and poached. The poaching water is then used to cook the rice (rice cooked in chicken fat equals yum). Any part of the chicken that’s not going to be served is used to make a light broth. The dish is served with dipping sauces, in our short experience a spicy chilli sauce and a ginger sauce, both equally complementary to the dish.

We had chicken rice at a few different places along Seah St and Purvis St but our favorite was Zheng Swee Kee (25 Seah St).  There are two Swee Kees on Seah St; this is the one on the corner at North Bridge Rd.  It was good value, a 2-person portion including a side of jellyfish for SGD$14 / €7.70.  The honorable mention goes to Chin Chin, on Purvis St. 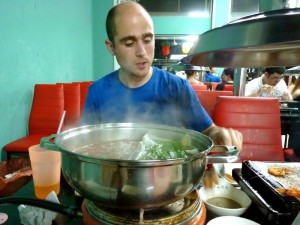 We’d had huo guo in Beijing and loved it, so we were psyched to find a sort of “Steamboat Lane” on Beach Road between Seah St and Rochor Rd. The steamboats in Singapore are buffet – order the broth you want in the pot and take whatever you want from the buffet to cook in it.  We went to Baidu Barbeque (23 Middle Road) which cost SGD$17 / €9.50 including unlimited fountain juices.  There was also a barbecue for grilling besides cooking in the steamboat.  We ordered half spicy and half chicken broth in our steamboat. We like spicy food and continuously reassured waiters all over Singapore that we could handle their spicy dishes, but this spicy broth was beyond our tolerance. The hot peppers would get lodged in or wrapped around the food we threw in, thus winding up in our mouths and setting our heads on fire. We were sputtering and overheated like a couple of old engines by the time we were through. Not even a dip in the chicken broth could cool us off.

We only managed to try Baidu so we don’t know how it compares to the other places along this strip. When you’re trying to decide have a whirl around the buffet to check out the spread but I suspect all of them offer similar wares and prices.

We ate at First Thai Food on Purvis St three times. It was close to our hotel and we were guaranteed quick service and good food for reasonable prices.  First Thai Food is labeled as a “self service” restaurant so that they don’t have to charge the 7% Goods and Service Tax (GST). Some of our favorite dishes were the pandan chicken (chicken cooked in banana leaf), pad thai and fried soft shell crabs with cereals (a revelation of salty, crispy soft shell crabs covered in sweet cereal fried in butter).

On a tip from Wandering Earl, we went to Gokul Vegetarian Restaurant in Little India (19 Upper Dickson Rd).  The menu is enormous with no photos, so don’t be shy about asking the wait staff for recommendations.  We nearly licked the bowl of the kadhai paneer (paneer cheese in a spicy sauce) and for dessert, we had mango kulfi, a mango frozen custard stuffed with pistachios.

After a blah dinner in Kampong Glam (see below), we were tickled pink to happen upon the Ice Cream Man (7 Haji Lane). This welcoming little shop has homemade ice cream with flavors that change on a regular basis. Prices are based on ingredients, with flavors that include some alcohol (like tiramisu) being most expensive. The scoops are generous and though more expensive than a supermarket ice cream, the prices are fair for artisanal ice cream (a couple of scoops at Ben & Jerry’s will cost more).

We only had two mediocre food experiences in Singapore.  One was at Gluttons Bay, a hawker center located along the bay near the Esplanade.  We had some overcooked calamari and some forgettable roti.  The location is unbeatable and the hipster atmosphere is fun, but the food is just not that great.  The other mediocre experience was at Cafe Le Caire in Kampong Glam.  Compared to other sit-down meals, the price-quality ratio was underwhelming – the portions were on the small side and the service was not worth the GST.

Our list is not exhaustive in the least but here’s some link love for the sites I found useful when deciding where to eat when we had time to plan ahead:

www.hungrygowhere.com – user-generated reviews to be taken for what they’re worth

http://ieatishootipost.sg/ - with the slogan, “Never waste your calories on yucky food,” this is a blog after my own heart

nevertrustascrawnyfoodie.blogspot.com - a great, fairly exhaustive Singapore food blog with some other eats thrown in

Directory of all the places we have mentioned in this post: