Moving Beyond “This” and “That” in Chinese

“Zhe ge” is one of the most useful expressions to know in Chinese. It means, “This one.” It’s efficient for getting what you want. No English menu and no pictures? No problem. Just walk around the restaurant, point to what someone else is eating and say, “Zhe ge.” Or if the person eating the dish you want is on the other side of the restaurant, “Na ge,” that one.

I studied Chinese off and on for about six months in 2012 but I hadn’t studied at all, not even five minutes, in 2013. When we arrived to Hangzhou, I spent several days surviving with “zhe ge” and “na ge.”

One of our favorite Chinese snacks is baozi, steamed buns. Back in Spain we have to make do with frozen steamed buns from the Chinese grocer, so we were delighted to find a baozi stand around the corner from our hotel in Hangzhou. 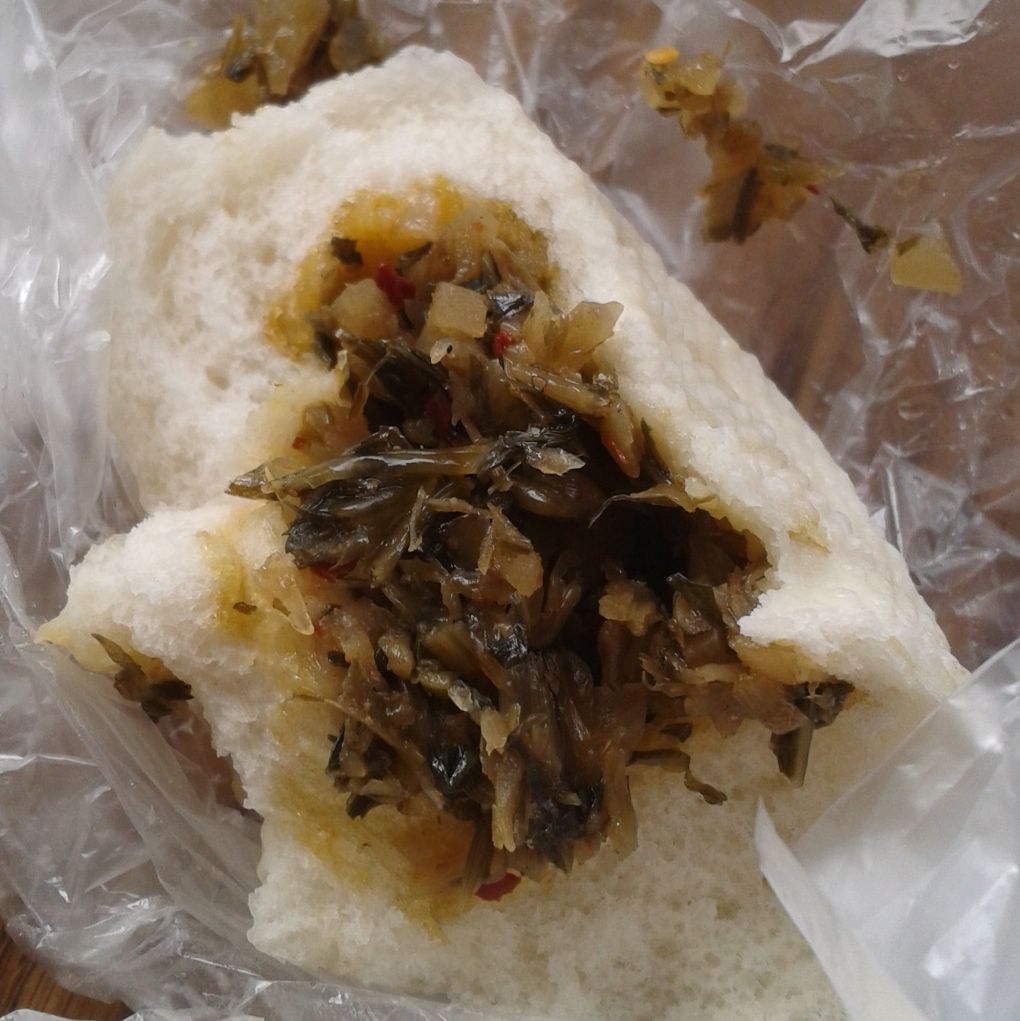 Two small problems: we prefer not to eat meat (though we are not vegetarian) and “zhe ge” doesn’t work for steamed buns because you can’t see the filling until you bite into it. Getting tasty baozi was a high priority, so in my first Chinese class I reviewed how to say, “I don’t want meat.”

That afternoon I gave it a try, marching straight to the baozi stand after class and declaring, “I don’t want meat.” The baozi lady flitted about, opening and closing the steam baskets, and finally presented us with two delicious baozi filled with a green leafy vegetable and tofu.

The next day, Asier brought the picture dictionary to the stand and pointed to a photo of red beans. “Zhe ge.” We had had baozi filled with red beans on our first trip to China in 2009 and were eager to eat some more. The baozi lady did not disappoint; we got our red bean baozi.

I went to Chinese class every morning for three hours. Since I had already studied some Chinese, my teachers compressed 15 elementary lessons into four days during my first week. Lesson one is just “hello, how are you?” Next! Do you already know how to tell time? Next! What about asking for directions? Ok, let’s just review quickly. Next! Do you know how to count? Moving on! I stumbled out of class in a daze, muttering nonsense. “Hello, my name is three o’clock, please, one question, are the baozi north or south?”

My second week in class, I reviewed food vocabulary. Now here was something useful. I learned how to say “red bean.” I went straight for the baozi stand again and ordered red bean baozi by name. Hurrah!

I was making progress in small daily life activities. I was able to get on a bus and ask if it was going to my stop. I could get in a taxi and tell the driver where I was going, without having the address written in characters on a card. When the cook at a noodle place we liked asked if our meal was tasty, I understood her and was able to answer, “Yes, very tasty!”

One day at the baozi stand, there were no more red bean baozi left, so she gave us a different one filled with sweet, yellow custard. It was delicious. It was huang dan, egg custard, and became another of our daily favorites. 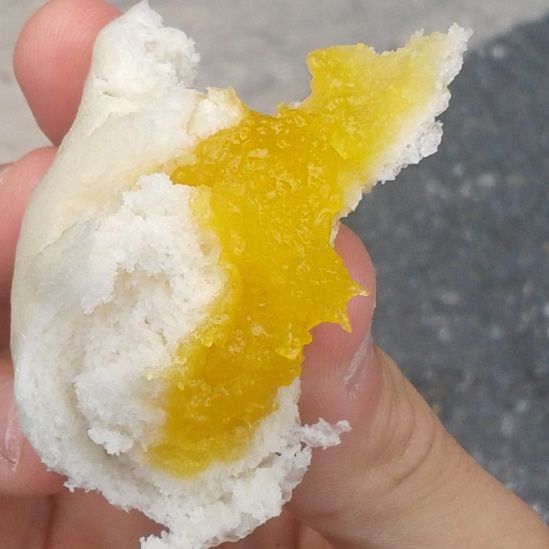 A few days later, our usual baozi lady was not there. I went back to the old standard, “I don’t want meat.” What was this? A baozi filled with spicy tofu! No meat and also delicious!

Having twice uncovered tasty, meatless baozi by accident, A. decided enough was enough. We ordered one of every baozi – 12 or 13 in total – just to see what was inside. There was one with vermicelli, another with cabbage and carrots and a tiny smattering of pork, another with a different leafy vegetable chopped up very small and with a slightly sour taste… All in all, many baozi to add to our rotation.

I kept on with my Chinese class. Chinese is a deceptively simple language when you start out. Verbs are not conjugated for subjects. “She now in Shanghai eat baozi.” Subject + time + place + verb + object.

My teachers were well aware of my baozi addiction. They often wove baozi into my lessons as examples. Did you eat baozi? Will you eat baozi tomorrow? When we reached the chapter on how to form a rhetorical question, my teacher said, “Do you like baozi?” I burst out laughing and used the new structure: how could I not like baozi? 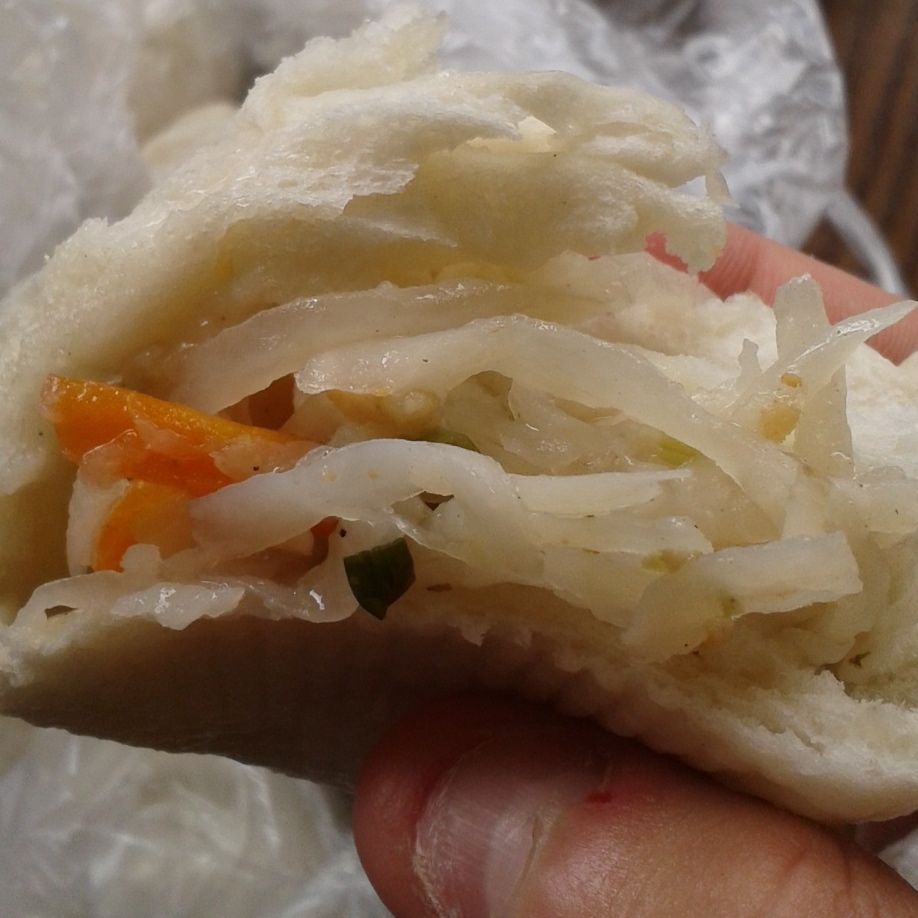 One afternoon in the midst of eating baozi, A. turned to me and asked, “How do you say ‘I love you’ in Chinese?” I smiled, thinking a romantic moment was coming on, and told him how to say it. He replied matter-of-factly, his mouth stuffed with red bean bun, “I’m going to tell the baozi lady that I love her.”

During my last week in Hangzhou, I was feeling quite saturated with Chinese. I had moved on to the gnarly grammatical concept of “complements.” Complement of result, complement of potential, complement of degree…more bits and bobbles to tack on to verbs in certain situations. I knew I had made some progress with my Chinese but I felt like I would never master everything that had been thrown at me over the course of a month.

On our last day in Hangzhou, we stocked up on baozi for an epic 21-hour train ride. I strode up to the stand and confidently ordered “the green ones, the spicy tofu, red bean and egg custard,” without hesitation. I told the baozi lady that it was our last day in Hangzhou, that we were returning to our country and that I would like to take her picture. She understood everything I said (though she really did not want her picture taken).

I may not have mastered the complement of result but I could chat with the baozi lady. That was enough progress for a month. 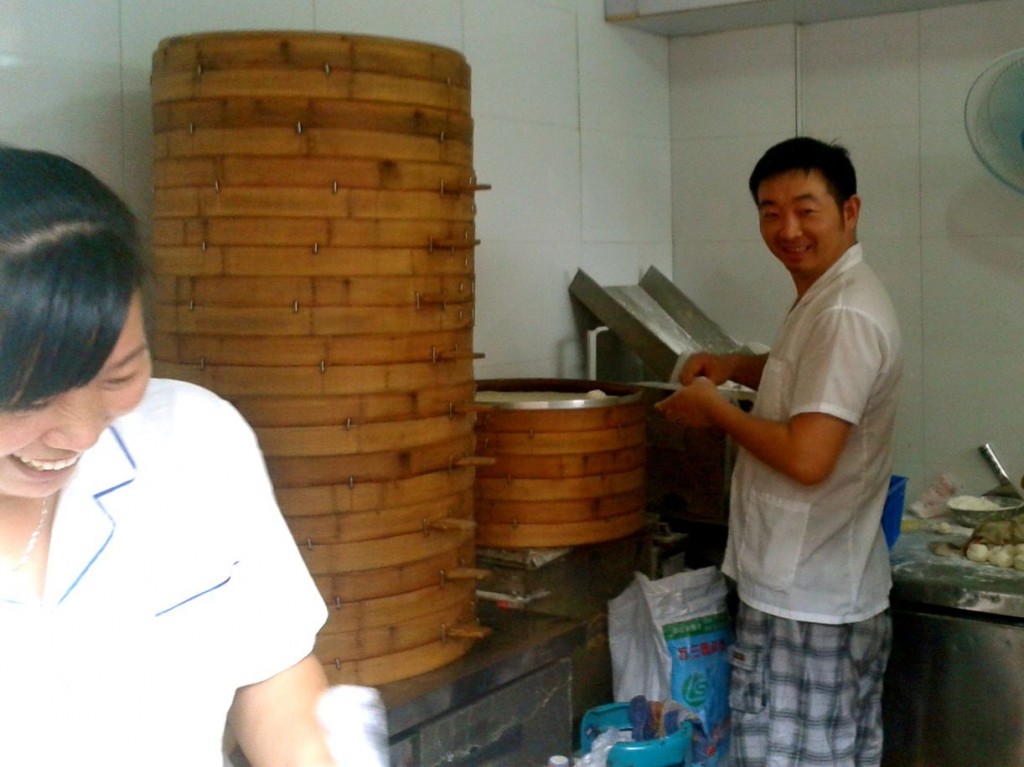 The baozi lady, avoiding having her picture taken