At the End of the Earth: Shiretoko National Park

The little girl behind me was crying so hard she was practically hyperventilating. We were at the Five Lakes in Shiretoko National Park and there was, it seemed, a good chance that there were bears in the vicinity.

We had been made to watch a safety video before setting off on the walk. Over a soundtrack of adrenaline-inducing music, images of bears charging and roaring illustrate the video’s main message: it is more important to avoid meeting a bear than to worry about what you will do if you see one. The only way to avoid meeting a bear is to make lots of noise. And if you do happen to see a bear, you should turn around and go back the way you came.

Needless to say, the video was generally terrifying. The little girl’s parents told her to clap to make noise and keep bears away.

I was terrified, too. A. thought it was ridiculous. Bears can hear and smell humans way before we can see them.

A. suggested I should sing. It would calm my nerves and make the requisite bear-repelling noise.

Don’t ask me why, but the first song that came to mind was “La Macarena,” accompanied by the manic clapping of the little girl.

Confident that the bears were sufficiently forewarned, we relaxed and enjoyed the walk. The water in the Five Lakes wells up from below the ground; there are no rivers. The lakes are therefore small but stunning. Each lake perfectly reflected the surrounding landscape. We have never seen such unspoiled nature. 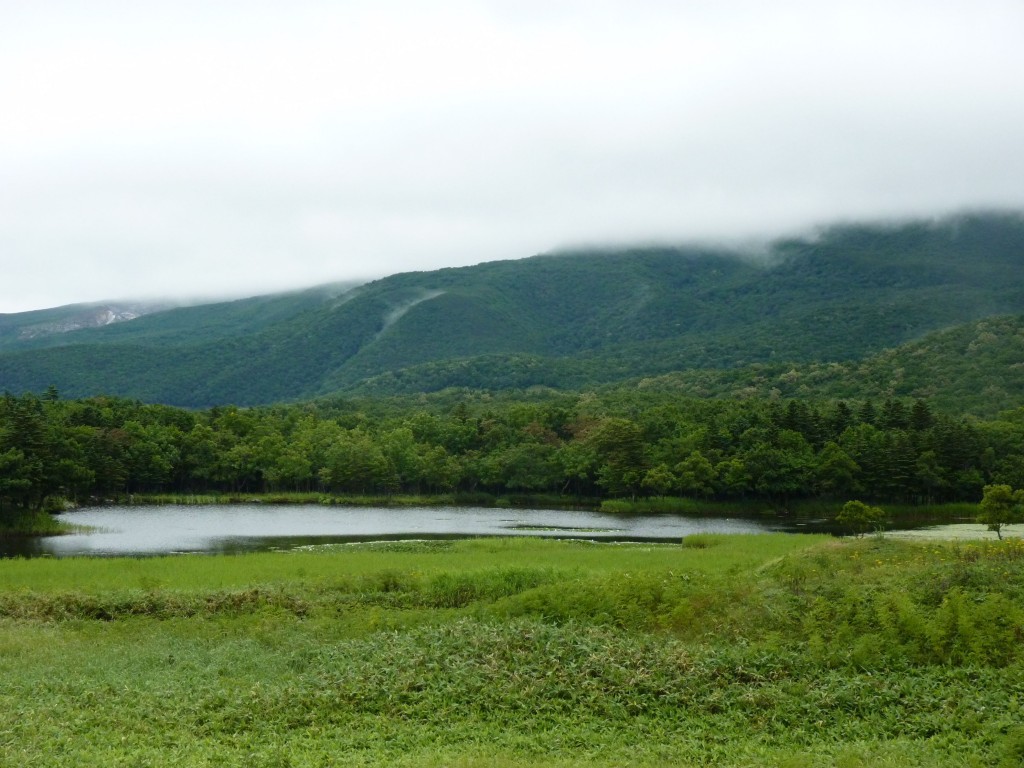 Fog and hills keep Shiretoko’s secrets out of sight

At the end of the Five Lakes’ walk, an elevated platform led back to the visitors’ center. Now we were out in the open, feeling the full force of the wind blowing in from the sea. Looking inland, hills covered in tall grasses obscured the view of what lay beyond. Shiretoko is full of secrets and surprises.

It had taken us three days to reach Shiretoko National Park from Tokyo by public transportation. Tokyo to Shin-Aomori, Shin-Aomori to Hakodate, Hakodate to Sapporo, Sapporo to Abashiri, Abashiri to Shiretoko-Shari and then a bus to the park itself. In total, about 17 hours and 30 minutes of travel time. (Not including three hours that we spent sprawled on the floor of Shin-Aomori station eating self-catered cheese sandwiches, waiting for the trains to start up again after a day of heavy rain.)

Shiretoko is derived from the Ainu word “sir etoko,” end of the Earth. Shiretoko is why we went to Hokkaido. We love to reach the edge of a country, the places where people thought the world ended until ships started sailing off to discover there was more. 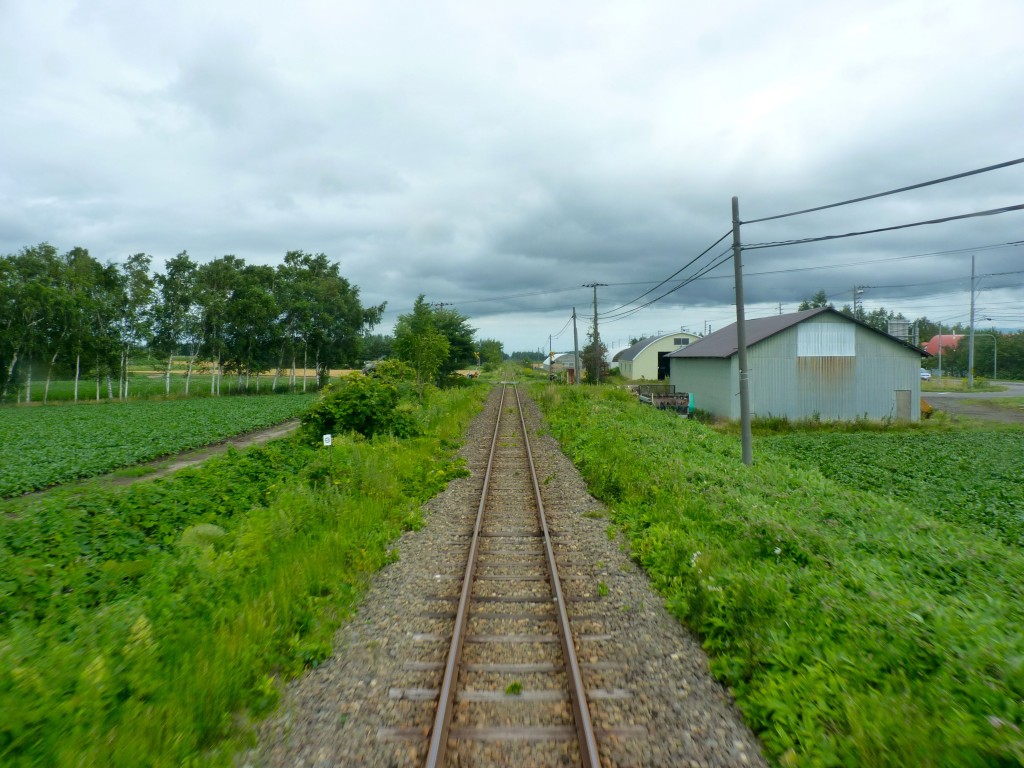 Hokkaido as seen from the train

On our second day in the park, we had a date with Mt. Rausu, a volcano with an elevation of 1,660m. We reached the trailhead at Iwaobetsu Onsen around 7 AM, planning to hike as far as we could to make it back down in time for the last bus out of the park around 16:30.

We’d been walking for about an hour, clapping and whistling along the way to ward off bears, when we saw a young couple coming towards us in the other direction. I stopped in my tracks. It was way too early for them to be descending from the top. Somebody coming in the wrong direction on a trail in Hokkaido can only mean one thing.

“We saw a bear!” the girl announced. Her boyfriend had a small, tinny bear bell that had apparently not done its job.

Not far behind us was a group of six big guys. They were talking loudly and stopped for a cigarette every half-hour – the kind of hikers we usually avoid. But at that moment, they were just what we needed.

We continued in a pack, the guys ringing their bells and A. and I blowing our whistles constantly. It was like a mountain Mardi Gras parade. I have never made so much noise on a hiking trail.

About an hour later, we were out of the forest and the trail became exposed for the ascent to the peak. The peak was covered in clouds that were getting thicker by the minute.

Allow me to digress for a moment. In June, we hiked to Triund near McLeod Ganj in India and were rewarded with a wall of clouds and an epic downpour at the top. In July, we hiked Mt. Daecheongbong in South Korea in the pouring rain. And just days before Mt. Rausu, we hiked Mt Kawanori near Tokyo to try to get a view of Mt. Fuji, only to be met with a sea of fog at the top.

Enough was enough. We gave Mt. Rausu a figurative middle finger and aborted the trail halfway. We weren’t mistaken. It poured on us all the way down and continued raining for most of the afternoon.

At the bottom of the trail, we were tipped off that there was an onsen just a minute’s walk away. And it was free! The small pools were full of hot water being pumped directly from a natural spring. After our jjimjilbang experience in South Korea, we were ready for the next step: mixed gender, outdoor, hot spring nudity. There’s nothing like a hot bath after a wet walk in the woods. We slipped right in for a soak. 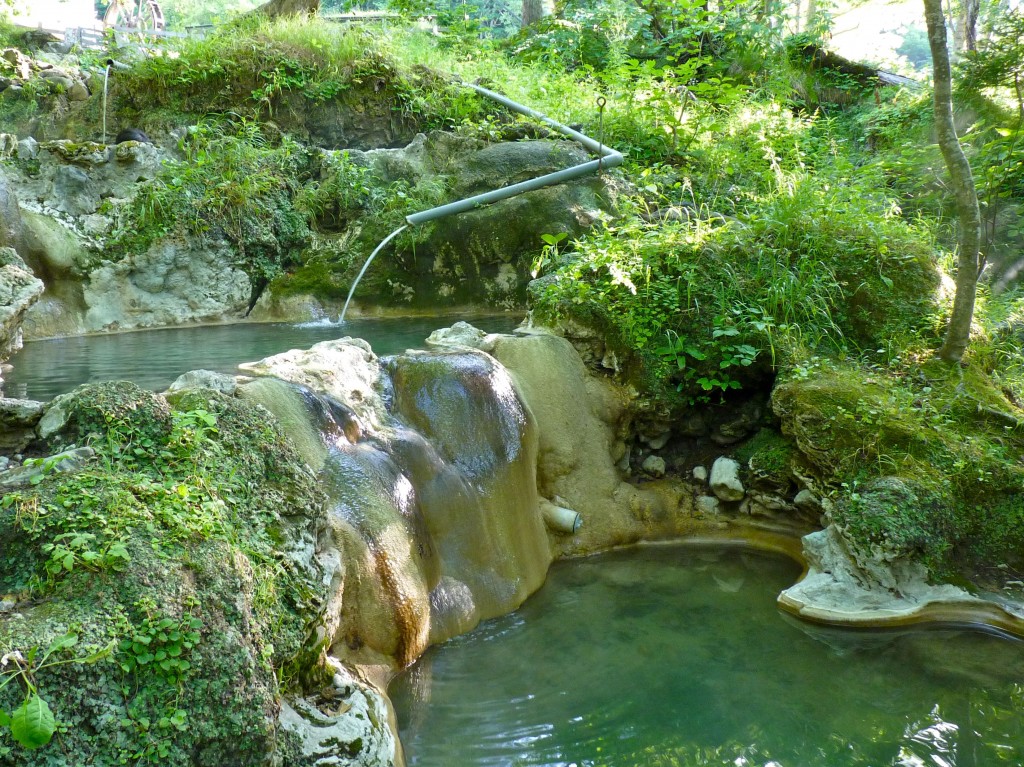 Iwaobetsu Onsen at the base of the Mt Rausu trail

Since we were done with the hike earlier than expected, we decided to hitch out of the park and back to Shari, where we’d be sleeping for the night. We had hitched a few times in the park in lieu of taking the expensive bus and discovered that Japanese people have no idea what the thumbs-up hitching gesture means. Most people laughed and waved and a few gave us a thumbs-up in return. We went part of the way to Shari with a traveling kitchen equipment salesman and the rest of the way with a French couple in a rental car. They knew why we were holding our thumbs out.

In Shari, we grabbed a map from the tourist office and went in search of our guesthouse. When we reached the street where the guesthouse should have been, there was no sign of any commercial business, guesthouse or otherwise. After wandering around in circles for 10 minutes, we saw a propane tank delivery guy and asked for directions. He put the address in his phone, tapped and swiped for about 10 minutes without saying a word, and then shrugged like he didn’t know anything. We convinced him to call the guesthouse to ask for directions. When he hung up, he smiled and motioned that we should get in the truck with him. A ride, how generous! One minute later we were back at the train station. He pointed out the window and said, “Train station. English.”

We got better directions on the second try and walked all the way back to where we met the delivery guy, passing it to reach the guesthouse. 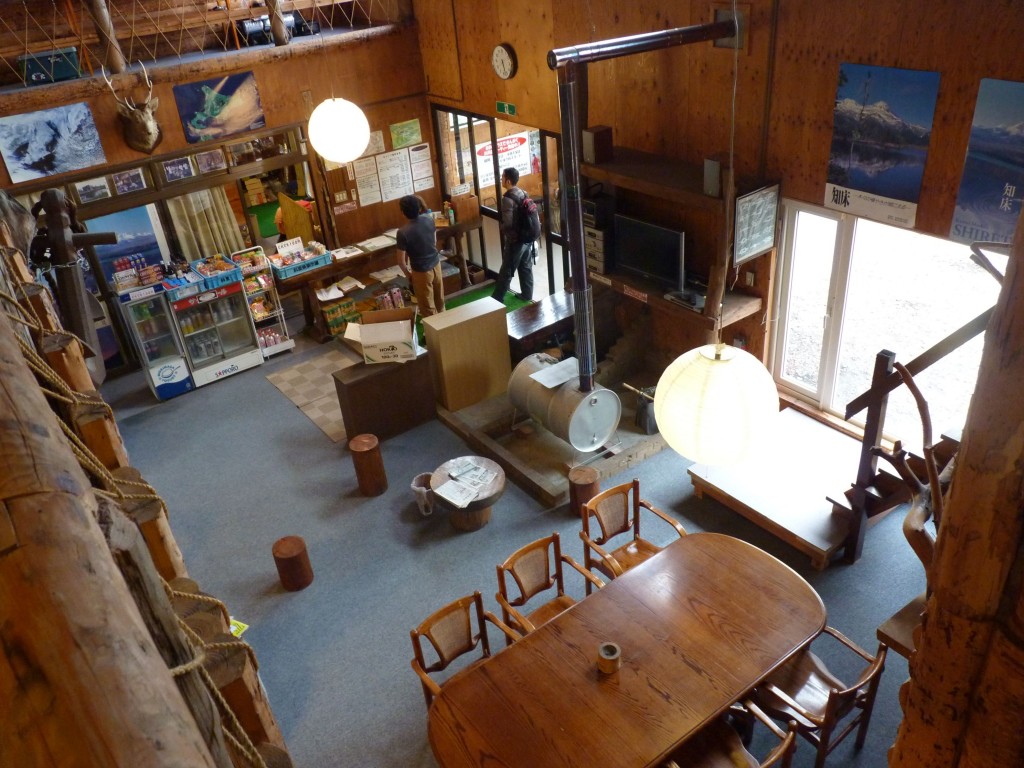 Common area of the “rider” house

The guesthouse turned out to be a “rider house,” oriented towards people traveling by bicycle and motorbike. They were confused that we were neither Japanese nor had wheels of any sort but had somehow arrived. It was worth the run-around. For 4000¥ (about USD$40), we had a private tatami room, use of a big kitchen, a large airy lounge to hang out and two private onsen. We had another onsen soak, of course, having had our packs on for awhile between the hitching and the getting lost.

In the evening, the rider house organized a common sukiyaki dinner: veggies and meat cooked at the table in a sweet sauce and dipped in raw egg. All around us, Japanese motorcyclists were knocking back cans of Sapporo and shouting over the gas burners. We ate our weight in thin-sliced beef, cabbage and udon. Nobody spoke much English but everyone was having a good time.

At the end of the meal, the owner came out with spiky red Hanasaki crab for everybody. The crab was the essence of Shiretoko: difficult to penetrate and prickly but what’s inside is worth the wait and worth the effort. 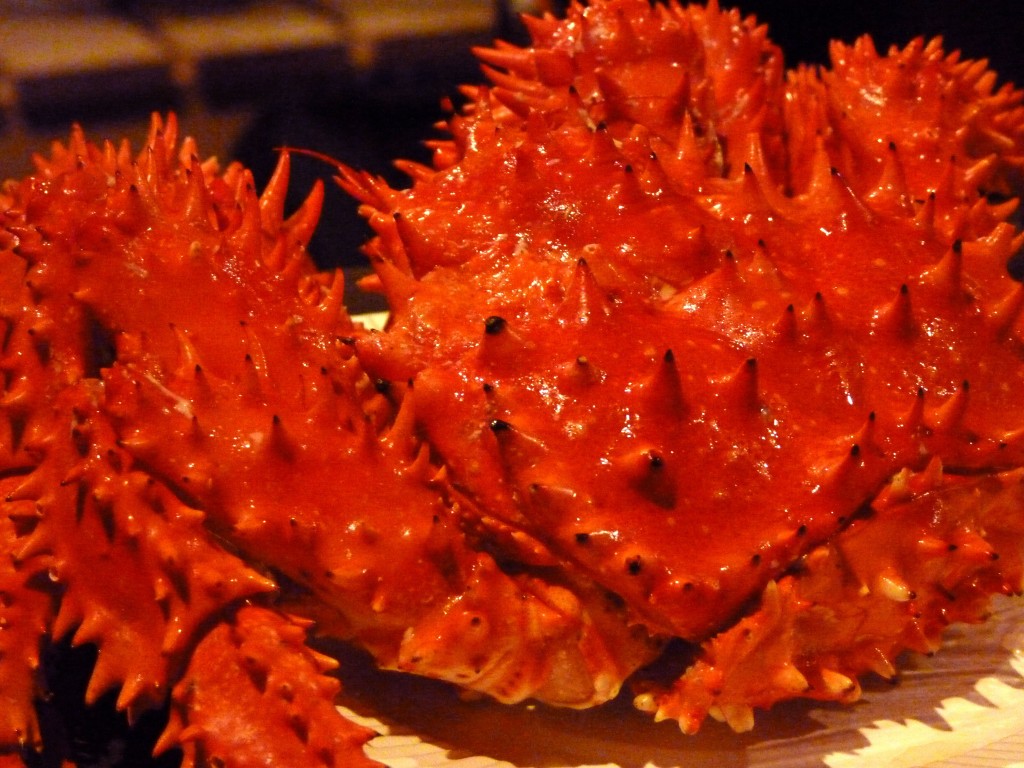