A friend in Hong Kong told us a story about the annual Christmas parties at his private school. All the students would bring a dish that was inevitably prepared by the live-in maid. The students would sample the food and it was a point of pride to have a maid who cooked well. The students would tell each other things like, “Your maid’s rice dish is not that good but her dessert is tasty. Next year she should only make dessert.”

And these were primary school kids.

Hong Kong has one of the fiercest food scenes we’ve ever experienced. It’s not just competitive to be in the restaurant business – though it is that, with a very high rotation of restaurants opening and closing – it’s also competitive to eat in Hong Kong. Anywhere worth eating, at least in Central, requires a wait. If there’s no wait, it’s no good.

We were in Hong Kong for a mere three days and there was only so much we could eat, but below are a few places that we enjoyed. Our born-and-raised Hong Kong friend oriented us so we never cracked a guidebook or looked at a review site. These places are nonetheless not hidden local gems but rather well-trodden and well-known good eats. 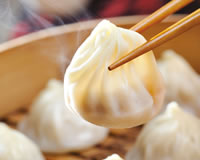 Photo credit: Din Tai Fung. We gobbled up our dumplings before we got a shot.

Din Tai Fung is a Taiwanese franchise and the Causeway Bay branch has been awarded a Michelin star. The xiao long bao - soup dumplings – are the draw here. Each table has an instruction card: first you dip the dumpling in a bit of vinegar, then you place it on your spoon and poke it with your chopstick so that some of the broth spills out and then you slurp the whole delicious thing off the spoon. The vinegar is optional, though we did find it to be a balancing flavor. Poking the dumpling is not optional – you will pretty much scald the inside of your mouth if you pop it in whole. We had both the classic soup dumpling with pork filling and a variation that had both pork and truffle, both very tasty.

On our friend’s recommendation we also ordered the drunken chicken as an appetizer. It is marinated in Chinese wine and served cold. The alcohol flavor would be overwhelming in a main dish but it’s a cooling start to a meal.

Total for 4 people (including the dishes above and a not-so-memorable fried rice) was about 650 HKD.

You’ve probably heard of that Michelin-starred cheap dim sum in Hong Kong. It’s Tim Ho Wan. We didn’t eat at the original location, but rather at a new location in the IFC building, just above the Hong Kong station where you catch the Airport Express. First you must get a number (and your party must be whole before they will seat you) and you choose your dim sum while you wait. You must hand in your order slip to be seated.

The most memorable dish was the char siu bao - BBQ pork bun – a sweet, flaky bun surrounding savory, juicy bits of pork. (Our love of all things bao has been previously documented.) We had a lovely shrimp and asparagus sui mai and an interesting shrimp and wasabi as well. Another signature dish is the tripe, but we’ve yet to meet tripe we enjoy so we didn’t order it.

We saw some small suitcases lined up along a wall, so the IFC branch could be an option if you’ve only got a short layover in HK or want to try to get in one last BBQ pork bun before flying out. If the queue is too long for you, you can order take-out. 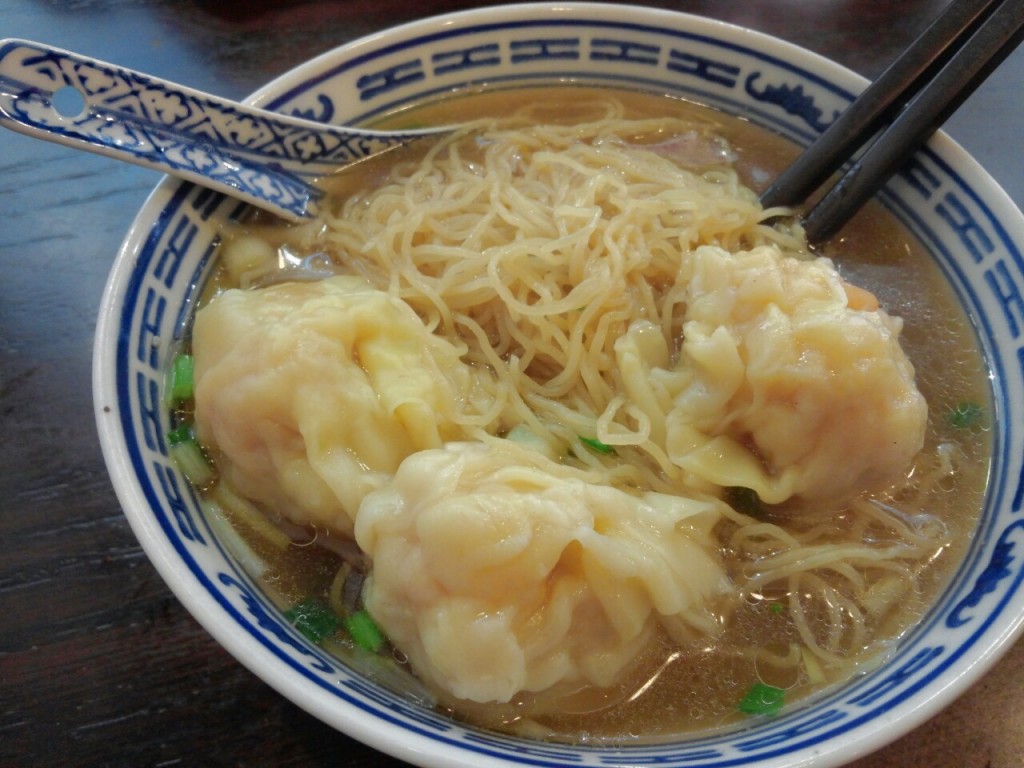 A. likes to eat noodles at any time of day, but when he suggested noodles for dinner in HK, our friend looked at him with one eyebrow cocked and said, “Noodles are for breakfast.” Oops. So the following morning we headed to Tsim Chai Kee for king prawn wonton noodle soup. For breakfast.

The king prawn wonton was pretty spectacular, a mess of whole prawns smashed together and enclosed in a chewy wonton skin. The noodles had a good bite to them and the broth tasted of all the bits of prawn that do not go in the wonton. We didn’t try the vegetables but they are also worth a go apparently.

Price for one bowl of king prawn wonton noodle soup is 24 HKD. 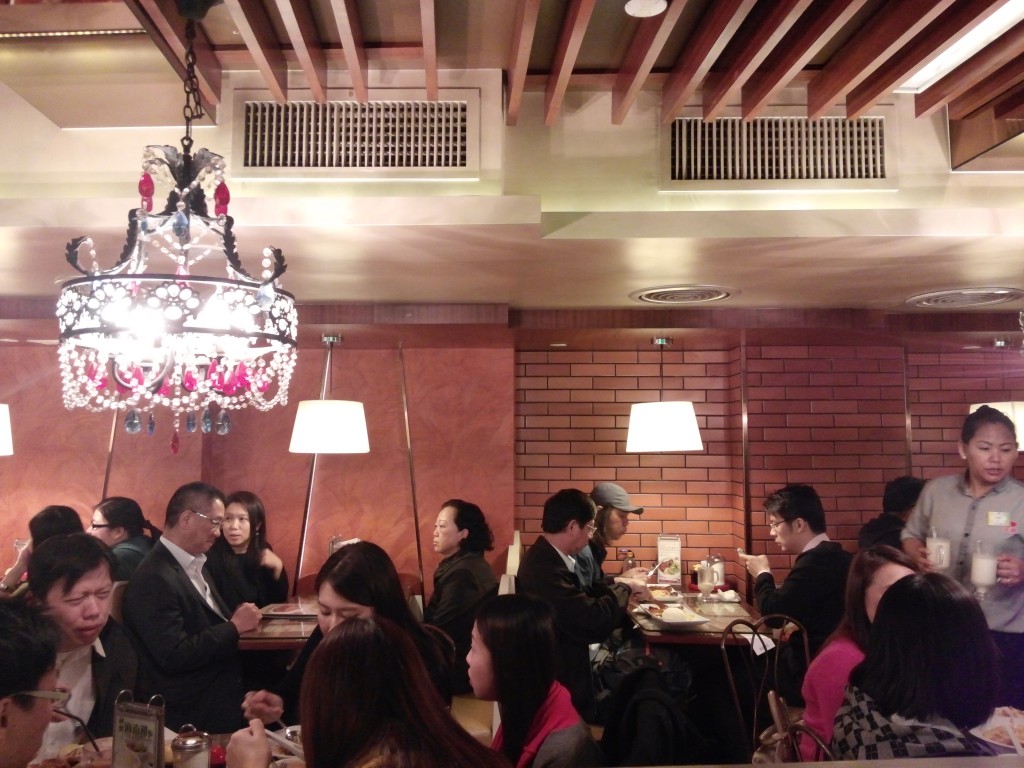 Hong Kong-style Western cuisine or “soy sauce Western food” is enjoying a bit of a comeback lately. It’s a Hong Kong take – some would say misinterpretation – of Western dishes served at cha chaan teng (tea restaurant). Tsui Wah is a chain with a branch in Central which is where we did most of our eating in HK.

We went during the lunch rush and got to share our table with a stranger as there were only three of us. We ordered Hainanese chicken rice (which we hadn’t eaten since our time in Singapore) and a curry pork chop. The chicken rice was very good though not unfamiliar. The pork chop was fried very crispy and left swimming in a bowl of curry where boiled potatoes were also hiding. It was strange and delicious. 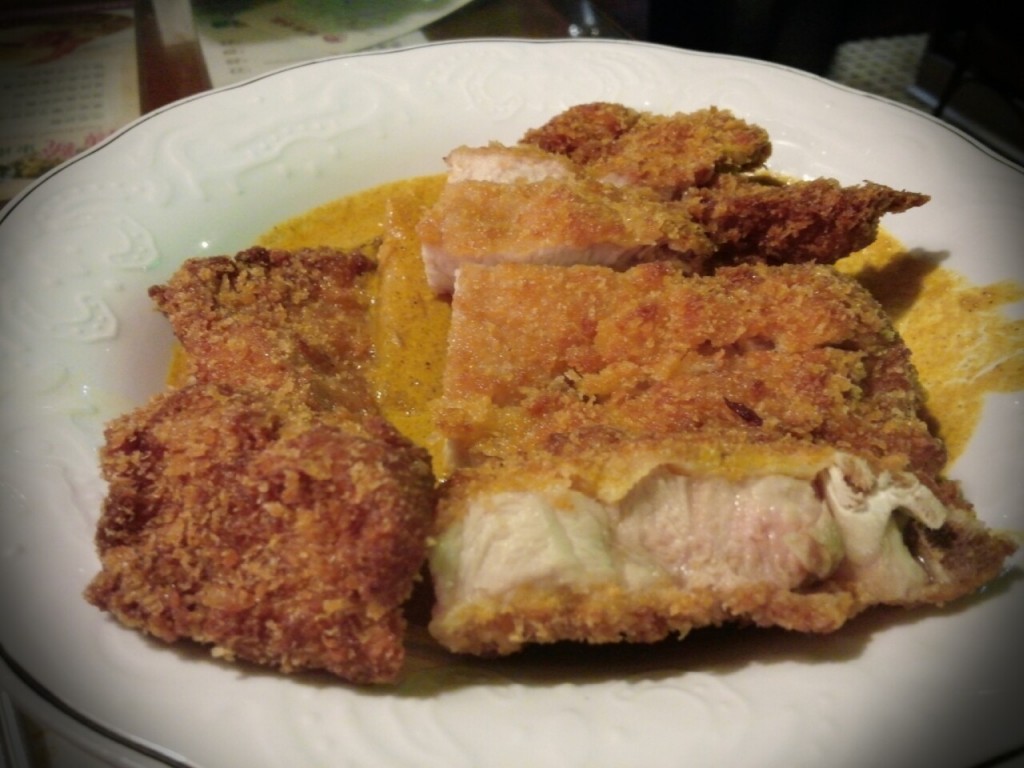 Dishes above and an iced tea came to 140 HKD. 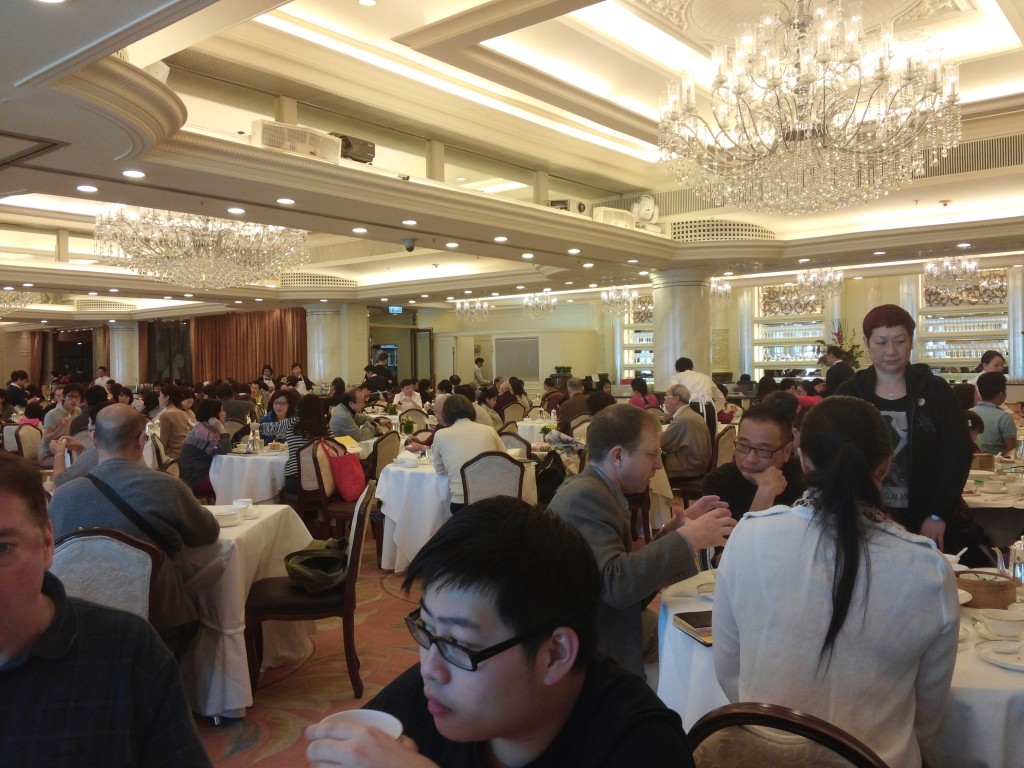 We left Hong Kong on a Saturday afternoon which gave us time to try one last Hong Kong tradition: weekend dim sum breakfast. This necessarily comes with a traditional Hong Kong queue. We arrived very shortly after the 11 AM opening time, so the first rush of customers who had arrived before opening had just been seated and we had to wait for them to get through their whole meal. We stood near the door and made evil eyes at anyone who cracked a newspaper while eating or lingered in conversation after they were finished.

Maxim’s Palace is located on the second floor of the City Hall building with lovely views of the Victoria Harbour. It’s a red-carpet, white-tablecloth, chandelier kind of place. The staff wheel the dim sum carts around the room, with English signage and prices displayed, and you simply gesture when you want something off the cart. Tea is served. All the dishes were tasty but we didn’t eat anything remarkable. What we most enjoyed about Maxim’s Palace was the experience – feeling like we were joining in the Hong Kong-equivalent of weekend brunch.

The bill really depends on how often you point to the carts but expect a minimum of 120 HKD per person.

If you get there after 2PM on a weekend, it’s possible that you will queue but not get seated before the service is over. 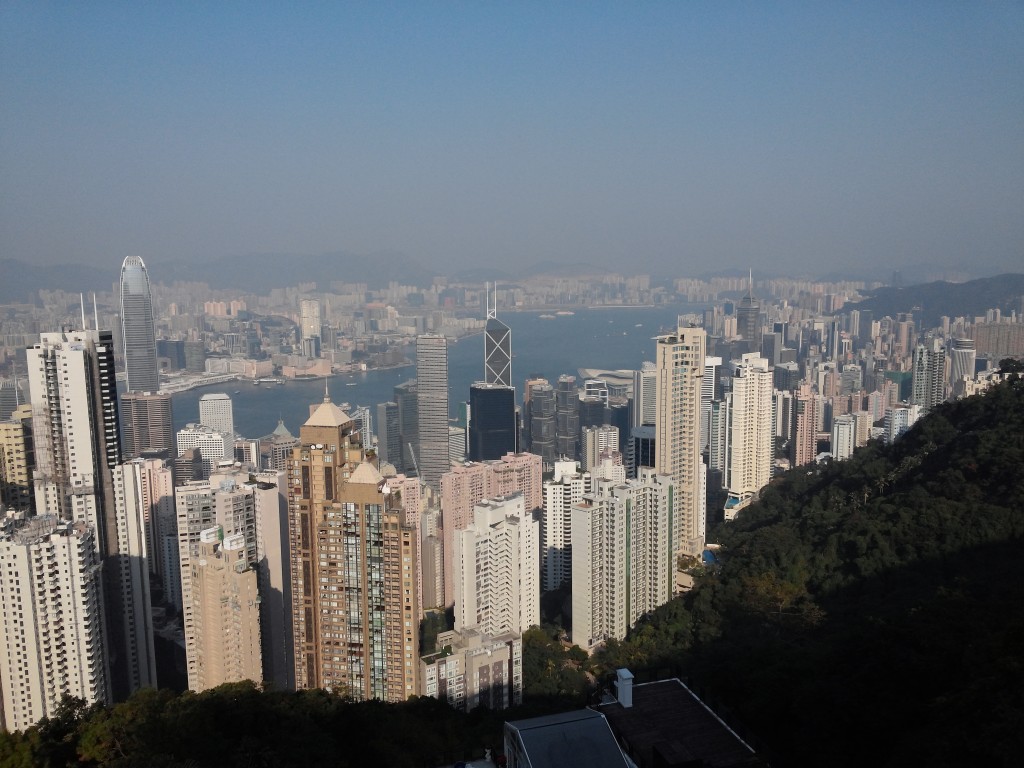 The Hong Kong skyline, towering over eating possibilities in every nook and cranny

When a restaurant in Hong Kong loses its Michelin star, it’s practically front page news. Like we said, it’s a competitive place. So go ahead, tell us we didn’t hit the best places in Hong Kong, that the IFC branch of Tim Ho Wan is inferior to the original, that Din Tai Fung is not even from Hong Kong…but make sure to leave your alternative recommendations.

We will be back to Hong Kong. To eat.